Simon Porte Jacquemus’ highly personal and joyous collections have captured the hearts, minds and indeed wallets of the most fashionable in recent seasons. Dan Thawley courses the aesthetic flourish behind the Jacquemus phenomenon.

There must be some sort of drôle metaphor for growth buried in the fact that one of the first Jacquemus shows in 2013 was held around the borders of a Parisian swimming pool, and that one of the most recent was held on the idyllic shoreline of the actual Mediterranean ocean in Simon Porte’s native Marseille. Just when we thought the Spring 2019 men’s season had drawn to a timely close, Jacquemus tempted a select crop of editors and friends down the winding roads of the Calanques (those majestic limestone inlets) that led to a pristine beachfront runway show, where male models walked barefoot in the sand to blaring French rap music followed by Simon himself, all smiles. “I grew up here, right behind those big limestone rocks, between the olive trees and the red tomato fields,” said Simon, of the homecoming feeling that accompanied the collection and its context.

And whilst some may argue that his smile is his best accessory (those 90s’ child modelling photos are brilliant Instagram fodder), the fact is the Jacquemus brand has undergone dramatic transformation in less than a decade, from a childhood dream to a multi-million-dollar company. Simon’s vision and designs have become an inherent part of the celebration of French style amongst a new generation of fashion customers, keen to see fashion not as a glamorous and untouchable goal, but as a joyful part of growing up. Despite his firm grip on the digital world, Simon’s universe is an honest one that centres around venerating simple things. Think: the analogue beauty of daily life – from a sunflower to a scooter ride, perhaps some naïve pottery, an ice cream cone, or a lover’s embrace.

“I’m interested in the idea that wool is not just a winter fabric for covering up and protecting you. It is also soft and supple, it breathes, so it can be wonderful and light for summer, too.”

Coincidentally, that July pitstop on the French Riviera represented not only Simon’s first foray into menswear, but a third partnership with The Woolmark Company that saw the designer explore the possibilities of the natural fibre in an entirely new body of work. Beginning with his Spring Summer 2018 collection ‘La Bomba’, it is a partnership that has paralleled a significant shift in the brand’s sophistication, as Simon’s earlier, more experimental collections have evolved into a more assured and feminine proposition. “I’ve moved from drawing and draping on myself, to draping everything on a woman,” he explained, of the sensuality so present in ‘La Bomba’. “Evidently the woman’s body has appeared much more predominantly in my work, in my collections since the ‘Santons de Provence’ show. And then ‘La Bomba’ was like the idea of a beach towel wrapped around the body.”

Held in the salons of the Musée Picasso in Paris, the landmark ‘La Bomba’ show for Spring Summer 2018 saw Simon blur the lines of tailoring and ‘flou’ by draping suiting wools into cascading, petal-like skirts, and sculpting asymmetric, knotted tops and dresses from fine yarns. “I’m interested in the idea that wool is not just a winter fabric for covering up and protecting you. It is also soft and supple, it breathes, so it can be wonderful and light for summer, too,” he said, also referencing the way that his blazers morph into dresses or fall into scarf volumes. Riding the wave of positive ‘La Bomba’ momentum, Simon set to work on an accompanying short film of the same name, with New York-based director Gordon Von Steiner, filmed in a single-shot format in Tenerife, Canary Islands. The joyful clip is a foot-tapping delight, with models and dancers stepping in and out of frame as Von Steiner follows a bevy of Jacquemus characters across the terrace of a beachfront villa. 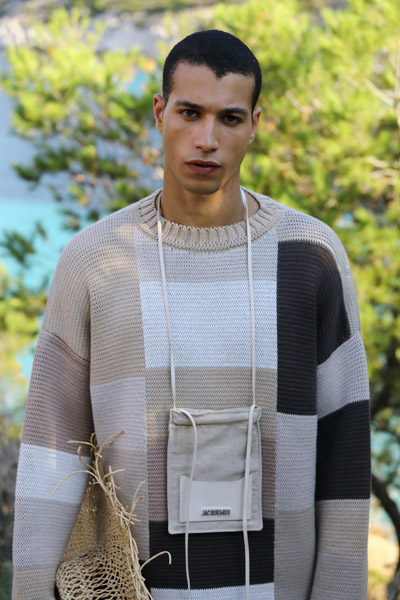 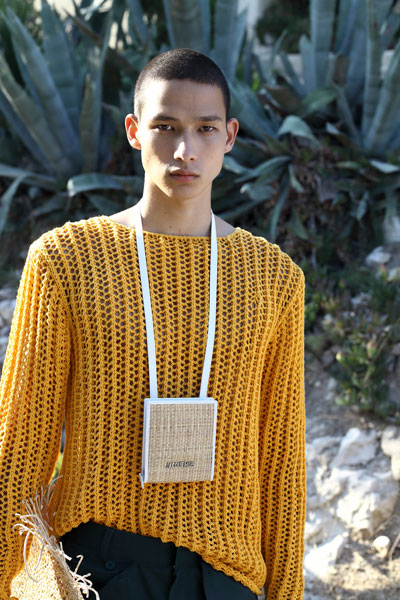 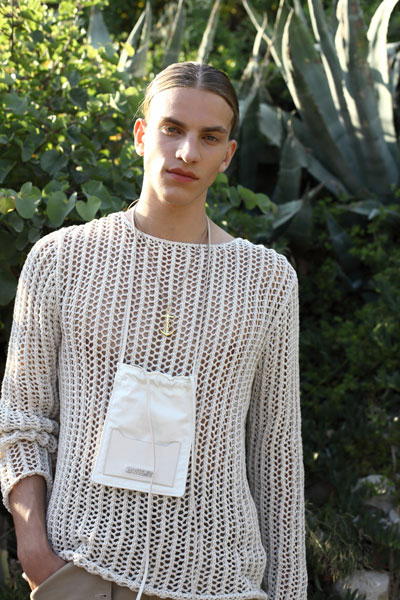 Since then, the natural development Simon’s aesthetic has led to a trio of strong collections that speak of his love for all things equatorial, from a trip to Marrakech for ‘Le Souk’, to the witty Marseillaise menswear debut of ‘Le Gadjo’, and the most recent ‘La Riviera’: a high-octane fashion moment held in the gardens of the Italian Embassy in Paris. All three have incorporated wool in unassuming, elegant ways for both men and women – from filmy scoop-neck dresses in fuzzy knit to intricately wrapped coats, textured polo shirts, and loose, open weave sweaters. In fact, Simon’s penchant for natural materials and an earthy palette lends itself perfectly to the versatility of wool: for him, it becomes a canvas for his unembellished creations – garments that rely heavily on expert patternmaking to shape the silhouette rather than dense craftsmanship or graphic interventions. Paired with cotton, viscose and linen, it accentuates the matte, somewhat bucolic hand feel of Simon’s designs, which manage to play across the spectrum from seductive to monastic without resorting to classic feminine decorations (case in point – there’s not a scrap of lace or beading to be found).

For the Spring Summer 2019 collection ‘La Riviera’, the dial certainly turned towards the saucier end of the Jacquemus scale, with a raised catwalk leaving little to the imagination as his cast of fresh faces skulked along in dry ribbed short shorts and gauzy cardigans layered with criss-crossed bikinis. Plastic bag straps, earrings, and embellished wedges came inspired by 80s’ Plexiglas furnishings, whilst the mix of earth and pastel tones were a nod to Simon’s love of Italian ceramics. Amongst them, a vibrant fuchsia barathea wool was a searing highlight when cut into a square, belted blazer and a deconstructed ruffle halter neck dress. Like Simon’s sandy-coloured Lesage fringing, the latter positively bounced its way down the catwalk – a dress for a fearless goodtime girl with a healthy dose of St. Tropezienne glamour to boot. "I see myself back then, when I was little, I was already trying to visualise her,” said Simon. “It’s a bit cliché, I know, but she was going to the casino on the seashore, she was dancing and drinking cocktails. I have always fantasised about Italy, the Côte d’Azur, the Riviera. I have always pictured her wearing an evening dress and a straw bag.” 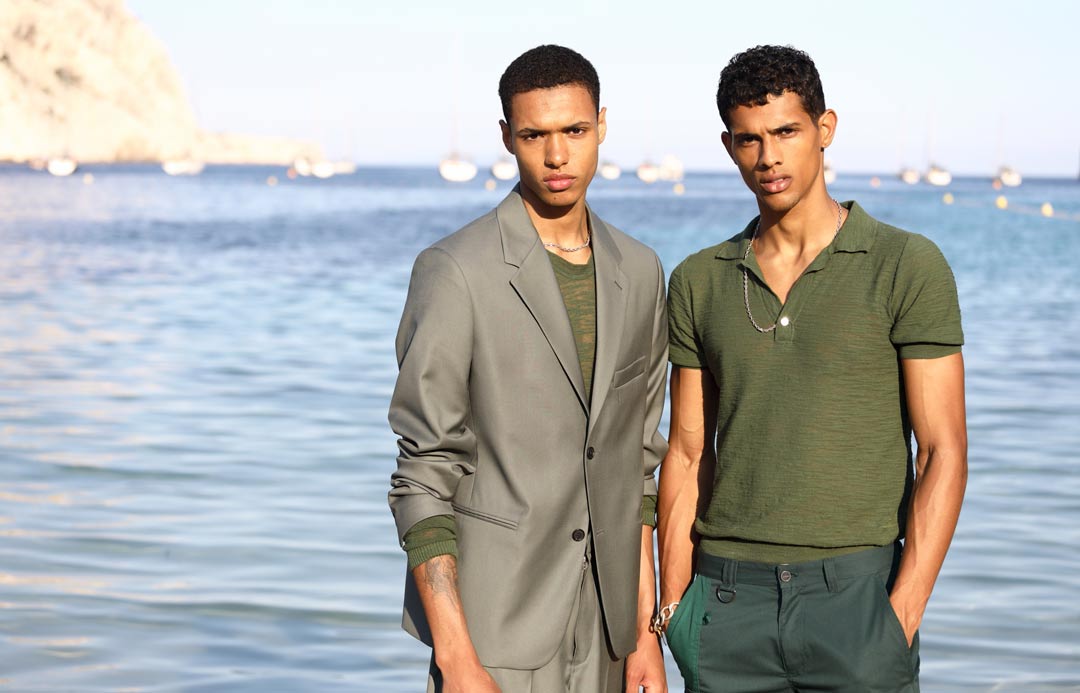 Six of the world’s most promising emerging design talents have been selected for the 2021 International Woolmark Prize - the world’s original and most prestigious fashion awards and talent development program.
10/01/2020
Newsroom

Stock up on everything you need to create your own Woolmark Prize designer accessory.
06/01/2020
Newsroom

The Woolmark Company has brought together five International Woolmark Prize alumni to release a series of exclusive knitting, crochet and cut-and-sew patterns, which can all be created form the comfort of your own home.